skip to main | skip to sidebar

Triathlon's Flag Flying at Half Mast

Triathlon's Flag Flying at Half Mast 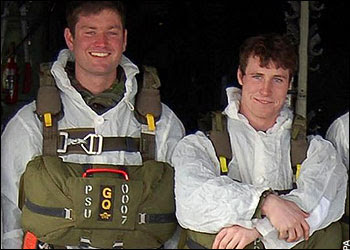 In the yesterday, I met a soldier at Starbucks who had returned from a mere two hours before - he was now just one flight away from getting home. I introduced myself and simply said, “thanks.” He graciously welcomed the gesture yet appeared wary of how the world would react to him.

The effect of the war on him as a soldier strongly showed in his eyes. We spoke briefly. He expressed his shock that the news only covered the negativity of the war and the not the other work and progress he saw in Iraq. He considered the 'negative' to be 10% of the total "happenings" and the other 90% to be positive, rebuilding, new roads, schools, buildings and utilities, all built with the help and support of the US military.

While we all wish for world peace, it is important to remember a soldier’s sacrifice. I was so grateful for the opportunity to thank a hero for his courage and more importantly—for his perspective.

This week I read a few news stories online about recently fallen triathletes, one in southern , one in and one in the UK.

I am sending comforting thoughts and wishes to their families.

Our sport, much like life – has both inspiration and tragedy. Be safe out there, not just on your bike, but in all the non-triathlon parts of your life, from the local freeway to , from your diet to your Doctor's visits. Take care of yourself.

I contemplate the tragedy of our fallen triathletes in relation to my newfound airport friend, the soldier. As he and I parted ways, I watched him slowly walk through the crowd. Dressed in full camouflage, he stuck out amongst the other travelers wearing comfortable flying attire. He walked cautiously as if walking through a minefield - a minefield filled with opinions of him as a soldier, and of the war. I cannot imagine how difficult it was for him to keep his spirits up while fighting for a county that was not 100% behind the war he was fighting.

I could see in his eyes that he had faced challenging adversities, yet he still held onto the inspirational things—rebuilding and rebuilding his life at home. Life is filled with challenges and tragedy, but we must remember to keep things in perspective and to never lose our inspiration - and to do everything we reasonably can to stay safe.

Godspeed soldiers, and triathletes worldwide - watch your back.